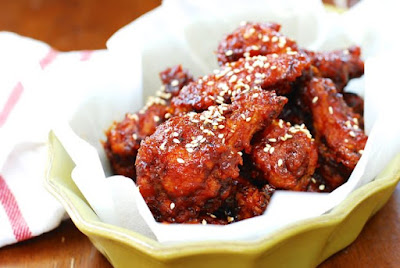 (I will miss Dang Dang Chicken.)

Yesterday, I woke up at 9 a.m. and drank a cup of freshly brewed coffee. Then I read the paper while enjoying a bathroom break. The Chinese powers-that-be recently closed down over 3000 websites. This little tidbit of information is certainly not surprising. After all, the PRC isn't known as a bastion of freedom. But I'm a little concerned for the fate of this blog. I recently purchased a VPN, so I should be able to get around the Great China Firewall. However, only time will tell.

One of my former coworkers called me. He managed to fix my Surface Pro Three. The guy did it free of charge. Talk about a gentleman.

I currently have two apartments. One belongs to my former employer, and the other I bought four-years-ago using my own cash. We drove to my employer's apartment in my nine-year-old Santa Fe. I mention this in passing. I've never had a bit of trouble with my SUV. Diesel engines last forever.

Anyway, it was time to clean. The amount of crap we managed to accumulate over the span of a decade was astounding. Luckily, one of our neighbors wanted the stuff in order to sell it at a local flea-market. She stopped by in a flatbed truck, and the boys and I loaded it up.

Ken said, "Why are we giving her our belongings? We could sell it ourselves and make a few bucks."

I said, "Do you know anything about Korean flea-markets?"

"Exactly. Trust me. That old lady is doing us a favor. You want to haul all that garbage up four flights of stairs?"

My other apartment doesn't have an elevator.

Later, we drove to Dang Dang Chicken. We ordered drumsticks and spicy rice cake. I washed the vittles down with two bottles of soju and a pitcher of beer. I'm a terrible glutton. My appetite knows no bounds.

I said, "Never use those stupid machines at McDonald's. They put people out of work."

Ken the Atheist frowned. "Why are we talking about McDonald's at a chicken house?"

"I'm just trying to educate you boys. Those damn ordering machines put people out of work."

Ken said, "Corporations have a right to save money. Those folk need to find real jobs."

Both my sons are a couple of dirty elitists.