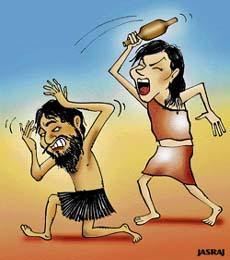 Yesterday, Miz Perfect wanted to go shopping, so we drove to the local Homeplus. The place was quite busy. It was almost impossible to find a parking spot. My wife kept using bad language to express her dismay, but I managed to keep my cool. Soon, I'll be in Shanghai. The city's population is 24 million. I must get used to crowds, or I'll go insane.

We purchased water, eggs, and bread. We also bought some beer. Miz Perfect's hands were trembling. She's been suffering from out-of-control Grave's Disease for the last three years. She recently had her thyroid removed with radiation. But her eyes are still bugged-out and her emotional state remains a roller-coaster ride. Grave's Disease is pure hell.

I said, "Do you want to eat dinner at a restaurant?"

"How about the beef buffet?"

So that's what we did. We drove to an eatery named Muso. For twenty dollars a person, you can consume all the beef your stomach can hold. I like the joint. I drank soju with my meal.

Then one of my former co-workers came inside. I waved to her, and we spoke. I felt uncomfortable. I used to work at a Christian school, so drinking is a controversial issue. Some think it's OK while others view it as sin.

I devoured a ton of meat. I weigh 250 pounds. I'm a morbidly obese fat man. I also drank two bottles of soju. What can I say? My blood is bacon grease and my urine is pure alcohol.

Later that night, I took a shower. When I stepped outside, I couldn't find my glasses.

"Tell me when you're finished."

"I can't even watch the television without them."

"I tole you to shut da mouth. Now I not give you da grasses."

So I sat on the sofa blind for about fifteen minutes. Then I found the spectacles resting on the kitchen countertop. Naturally, I put them on. Miz Perfect experienced an extreme episode of Grave's rage.

"Give me da grasses, or I bleak you computa. I put it in da wata."

She started walking toward the sink. I managed to wrestle my laptop away from her. But my resistance drove her to the point of lunacy. She kicked me several times in the thigh with her right foot. Her blows hurt like hell. After that, she smashed a plastic serving tray over my head. It broke into a million pieces.

Eventually, Miz Perfect regained her senses, and I went to bed. But here's the point. It's unacceptable for a woman to hit a man. It's abuse.
Posted by Jack Smith at 10:08 AM