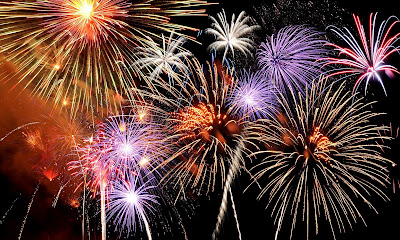 (The fireworks got canceled.)

Yesterday, I woke up at 10 a.m. and drank a cup of freshly brewed coffee. Then I read the paper while enjoying a bathroom break. A gambler from Shanghai lost his life savings. So he targeted a woman and her infant son in order to make a few bucks. He held a knife to the throat of the child and demanded that Mom give him cash. This happened in the basement parking garage of a Carrefour department store. The thief ran away with approximately $800. However, he was soon apprehended by the powers-that-be. This scoundrel is currently in jail on charges of robbery.

We decided to walk to the beach in order to view a fireworks display.

Ken the Atheist protested. "I'm going back to America in three days. You should do what I ask. That's the polite way."

Miz Perfect became frustrated. "You pray too much computa game. It not healthy."

"But I get good grades."

We began humping it toward our destination. However, it was real humid outside, so my wife hailed a taxi. The ride came to five dollars. We ate overpriced shellfish at a seaside restaurant. The kids also devoured a huge plate of noodles with hot sauce and squid-bits. I kept my distance.

I said, "What time do the fireworks start. Heck, we can just sit here and watch."

Miz Perfect said, "It not start till nine. Ret's dwink copee. I have da coupon for Starbuck."

I hate Starbucks, but I decided not to argue. I drank a cup of overpriced Earl Gray tea while the boys played with their smart phones. My wife became angry.

Ken said, "Why? This is Starbucks. Everybody plays with their phones."

We finally made our way to the beach. There was an announcement in Korean over the loud speakers. My wife frowned.

I said, "What happened?"

We caught a taxi back to our apartment. I watched the latest episodes of Snowfall and The Mist. I had a good time. Then I said my prayers and went to bed. I slept like the dead.
Posted by Jack Smith at 10:51 AM