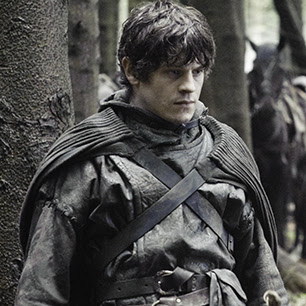 (Ramsay Snow is one of my favorite characters.)

Yesterday, I woke up at 9 a.m. and drank a cup of freshly brewed coffee. Then I read the paper while enjoying a bathroom break. A mentally retarded woman from Shanghai tried to kill her child with a hammer. She claimed it was an act of mercy. She was worried that the boy wouldn't survive if she died. Luckily, the kid only sustained minor injuries. Mom was given a three year prison sentence for her crime.

I walked with Miz Perfect to the dentist. That's one of the great things about living in Korea. You don't have to drive all over the place. My dentist gave me ample Novocain and proceeded to drill and buff my bad tooth. He managed to save the nerves. Today, I'm in a little bit of pain. But I'm a big tough American man, so I should be able to suck it up. In the future, I'll need dentures. I've come to grips with the fact that I'll die a toothless old hillbilly. Oh well. What's a boy to do?

Rice-Boy Larry went to another party. He's an extremely popular boy. I stayed home and watched Game of Thrones. I'm almost done with season six. One of my favorite characters is Ramsay Snow. He's a very bad man without a conscience. He even feeds his newly born brother to the hounds. Anyway, Sansa Stark gets her revenge. She turns the table on Ramsay, and the villain has his face chewed off by his very own beloved dogs. Game of Thrones is filled with buckets of blood. I love it.

Ken the Atheist rolled out of bed at 2 p.m. He walked past me and farted. It was a wet smelly atrocity.

I said, "Do you have any plans today?"

"Do you want me to make you something to eat?"

Ken put his clothes on and left the apartment. He's enjoying a great vacation. Soon, he'll be back in America. His school starts on August tenth. He wants to be a registered nurse.

I got an email from China. I was told to bring Rice-Boy Larry's original birth certificate to Shanghai for his S-visa. I explained the problem. Larry's birth certificate is the property of the Korean government. It's part of his family registry. I can only get copies.

China soon realized the error. I've already sent an authenticated family record. It seems that this document will do just fine. Paperwork for living on the Mainland is a true pain in the ass. But things are progressing nicely in spite of the confusion.

Later that night, I said my prayers on bended knees. Then I slept like the dead.
Posted by Jack Smith at 10:46 AM