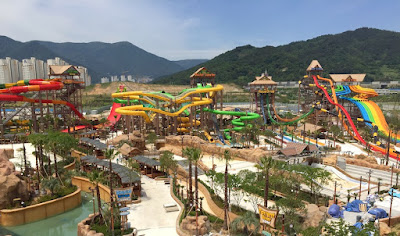 (I'm not a huge fan of Lotte Water Park in Gimhae.)

Yesterday, I woke up at 9 a.m. and drank a cup of freshly brewed coffee. Then I read the paper while enjoying a bathroom break. A Chinese woman named Cheng took her three-year-old daughter to an amusement park. The little girl became fascinated by a ride which featured spinning seats shaped like coconuts. She reached out to touch the ride and was struck in the head. She suffered a blood clot in her brain. Luckily, the doctors were able to remove the clot. However, the procedure was expensive, costing more than $26,000.

We drove to Gimhae to visit Lotte Water Park. Perhaps I'm a Grinch, but I found the place to be a giant rip-off. Four tickets came to $170, and we weren't even allowed to sit on a beach chair. The powers-that-be charged us another $20 for that privilege. A thunder storm hit, and we tried to take refuge under a wooden platform that had a roof. However, we were kicked out because the platforms actually cost $150 to rent for the day.

We spent the night in a love motel. These are places where young Koreans go to fornicate. But the price was right, so I didn't complain. I paid less than $50. You can't beat that. Plus the room was clean and spacious. It featured a large flat-screen television and a computer. South Korea is an expensive country. However, love motels are truly a bargain.

Miz Perfect asked the desk clerk to lead her to a good sashimi restaurant. That kind of pissed me off a bit. We live on a peninsula which is dotted with raw fish establishments. It's not like we needed a guide. Furthermore, the guy sat down and ate with us. He simply wouldn't go away.

I said, "Tell him that he has a huge snot hanging out of his nose."

And this was true. It was putting me off of my dinner.

She said, "I not tell him. It imporite."

I drank a lot of soju, and eventually his unsightly booger became a non-issue.

After sashimi, we walked to a nearby McDonald's. We bought several Big Macs and French fries for the children. I ordered five apple pies. I noticed that Miz Perfect was talking to the girl at the counter in English.

I scolded her. "Use Korean or she'll get the order wrong."

The girl said, "I studied in America for several years. I'm not going to get the order wrong."

I said, "Sorry, I didn't realize you knew the language so well."

We walked back to the motel. I fell asleep before my head hit the pillow. But Rice-Boy Larry started crying in the middle of the night. I thought that he was hurt or something. Maybe he had been bitten by an insect.

I said, "What did you dream about?"

I put my head back on the pillow. I slept like the dead.
Posted by Jack Smith at 1:42 PM