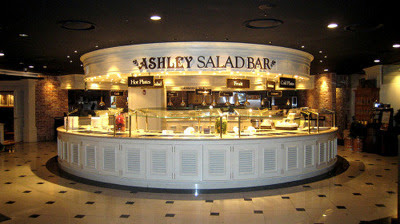 (Ashley is overpriced and mediocre at best.)

Yesterday, I woke up at noon and drank a cup of instant coffee. Then I read the paper while enjoying a bathroom break. There's a huge heatwave in Shanghai. So far, the extreme weather has claimed four lives. Many Chinese citizens are seeking relief by sleeping outside next to the river. Unfortunately, they're leaving their garbage on the public roadways. This is driving the local police crazy. The powers-that-be believe that the unsightly pollution might hurt tourism.

We left the love motel at 1 p.m. and drove back to our humble abode in our nine-year-old Santa Fe. I've never had a single problem with my SUV. Diesel engines last forever. If you move to Korea and purchase a Santa Fe, you could do a hell of a lot worse. The vehicle is very dependable.

We went to a restaurant called Ashley. It features an American-style buffet. The eatery has a Gone With the Wind motif. Ashley is the character played by the late-great Leslie Howard. He's the one with whom Scarlett is in love. I truly hate Ashley. The buffet costs nearly $20 per person, and the food is usually complete crap. But I'm often forced to go there because Rice-Boy Larry loves the joint.

We walked to a store called Shoopen to shop for clothes. I bought four short-sleeved collared shirts for $120. I told Miz Perfect not to purchase them.

I said, "It's too expensive in Korea. Let's wait till we get to China."

She said, "What you wear to work?"

I said, "I'll wear something cheaper."

She said, "You shut da mouth."

I saw a pair of olive-colored shoes that I liked, but the shop didn't have them in my size.

We got home at 9 p.m. I listened to Yes on YouTube. The group jammed with Geddy Lee. Geddy is a great bass player. He's the lead singer for a group called Rush. I like them, too.

I'm really happy that I'm moving to China. Quite frankly, I need a change. I hear that the food in Shanghai is both delicious and affordable. I can't wait to try the fare.

I prayed to God and went to bed. I slept like the dead.
Posted by Jack Smith at 10:39 AM