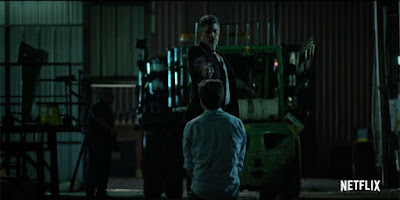 (Ozark is another great television show.)

Yesterday, I woke up at 9 a.m. and drank a cup of freshly brewed coffee. Then I read the paper while enjoying a bathroom break. A building in Shanghai collapsed, injuring one person and killing five others. The structure used to be a bank. It was slated for demolition in the near future. The Chinese powers-that-be are currently investigating the accident.

I read the Shanghai newspaper every day. Lots of people in China die from accidents. I'll have to be very careful.

Miz Perfect went downtown to meet her friends for coffee. She left several bacon sandwiches on the kitchen table. They were delicious. She made them with French bread. I love French bread. The kids and I devoured the fare in record time. My children have the table manners of the average Korean male. Those of you who live on the peninsula know exactly what I'm talking about. I suppose the table manners in China will be comparable. Heck. Maybe worse. But that's OK. I'm also a disgusting filthy slob. So I harbor no ill-will.

Ken the Atheist went to the PC room. Soon, he shall return to America. He leaves on the 31st of July. He's taking a lot of high level courses. For instance, he's in honors algebra II and honors biology. I was a crappy high school student. In fact, I never opened a book. Therefore, I'm quite proud of his academic success.

I watched several episodes of a show called Ozark. It's about a crooked investor who runs afoul of a drug lord. He moves his family to rural Missouri in order to save his skin. The program is excellent. It stars Jason Bateman and Laura Linney.

Movies really suck these days unless you're into Ironman and the rest of the trash. All the serious work is being done on television. The upside is that a person doesn't have to be a star to get a juicy role. Just look at Brian Cranston and James Gandolfini. They made the names Walter White and Tony Soprano world famous. Meanwhile, Oscar-winning artists like Robert Downey Jr. are too busy playing superheroes for bags of cash.

Miz Perfect returned at 6 p.m. She prepared chicken soup for dinner. The broth was full of rice and ginseng. It tasted excellent. My wife's a wonderful cook. She excels in all things feminine.

"Are you stoopid? We must crean da school apart-ah."

And she's correct. The school wants its apartment back. It doesn't have to be spic and span. In fact, Korean movers usually handle the cleaning duties. But my poor wife is obsessed with dust and grime. She won't be happy until the entire world is spotless.

I said my prayers at one a.m. Then I climbed into bed and slept like the dead.
Posted by Jack Smith at 11:00 AM