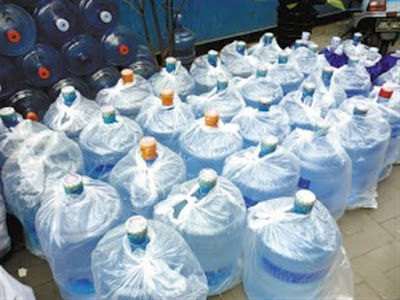 (A Chinese man was busted for selling fake water in Shanghai.)

Yesterday, I woke up at 9 a.m. and drank a cup of freshly brewed coffee. Then I read the paper while enjoying a bathroom break. A man from Shanghai got arrested by the police for selling fake water. He had lots of plastic containers and put fake labels on them like Nestle. After that, he filled the containers with tap water. If he had succeeded with his scheme, he would have made more than $22,000. The world is filled with risk-takers. For better or worse, I've never had the balls to break the law.

I watched several episodes of American Crime Story. The show is first-rate. It comes with my highest recommendation. It's about the O.J. Simpson trial. The story was big news back when I was in my early twenties. O.J. slaughtered his wife and Ron Goldman with a large kitchen knife. He was so angry at the time that he almost decapitated both of his victims. However, he got a free pass because the black jury wanted to poke the Los Angeles police department right in the eye. They were still angry after the whole Rodney King debacle.

Ken the Atheist rolled out of bed at 11 a.m.

He said, "I'm going to meet my friends downtown. I'll be back sometime tonight."

I said, "Do you want me to make you something to eat?"

Ken walked out the door.

He's going back to America soon. It's a strange thing. When my boy's in the United States, I actually talk to him more than when he visits Korea. FaceTime and Facebook are marvelous. We talk for hours, and it costs nothing. Technology rocks.

Rice-Boy Larry spoke to me at four p.m. He said, "Dad, do you want to go watch 47 Meters with me and Mom at the movies?"

He said, "Two girls get caught at the bottom of the ocean and get eaten by sharks."

I simply didn't have the juice. Sometimes, I must stay home in order to restore my batteries. I'm not some young spring chicken.

Miz Perfect left me dinner on the kitchen table. She made pork sandwiches with French bread. I love French bread. I devoured the food in seconds flat. Then I washed the vittles down with several glasses of generic cola. I'm a broke dead dick, so I can't afford the good stuff.