Where are the kids with Down's Syndrome? 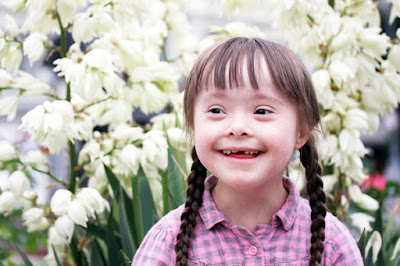 I've been married to a Korean woman for eighteen years. And it's been quite challenging. I call her Miz Perfect. Our cultures are completely different--which often leads to bitter disputes. Yesterday was a case in point. She scolded me for being too honest.

Miz Perfect said, "I rie to my fliend at party. I tell her dat we meet in Amelica."

My youngest son Rice-Boy Larry recently had a party to say goodbye to his friends. He ate lots of cake and received cool presents.

I got a little bit angry. I'm not smart enough to lie. I can never remember what I lied about, and I end up looking like a fool.

I said, "It's just best to tell the truth. Besides, all my students know that we met in Daejeon. So she'll eventually find out that you aren't telling the truth."

"You da stoopid man. Why you tell da twooth? Dey know we meet in da ba?"

Miz Perfect gave me an evil smirk of triumph. "Den you da riar, too. We not meet in da lestaulant. We meet in da ba."

"Technically, it was a restaurant. It served fried squid and anchovies. Food equals restaurant."

I always lose these arguments.

I watched several episodes of Game of Thrones. Season seven is right around the corner, and I can't remember what happened in season six. I'm a big fan of the series. The show is filled with outrageous violence, and it's impossible to predict who is going to die next. I believe that the girl with the silver hair and the three dragons will eventually win the throne. But what do I know?

Later in the day, I walked to a restaurant with my family. I noticed that I didn't see any kids with Down's Syndrome. I never see them. In America, Walmart is filled with children who have various mental and physical shortcomings. Yet they seem to be pretty much nonexistent here on the peninsula. Where are they? Have they been aborted? Are they crammed into a special house? I just don't know. It vexes me.

We ate overpriced shellfish. One little plate in the center of our table cost thirty dollars. I drank two bottles of soju. I became quite drunk.

My oldest son Ken told me that he's an atheist.

He said, "Dad, I'm an atheist. I don't believe in an all-knowing God and a devil with goat horns."

I said, "That's OK, son. You're old enough to believe what you want to believe."

When I was his age, I was an atheist, too. It's all part of the spiritual journey. Besides, I didn't have the energy to argue. My boy was trying to harsh my buzz, and I simply refused to take the bait.

We took a taxi home. I said the Lord's Prayer before going to bed. Later, I slept like the dead.
Posted by Jack Smith at 9:14 AM