Buying an apartment in Sejong City 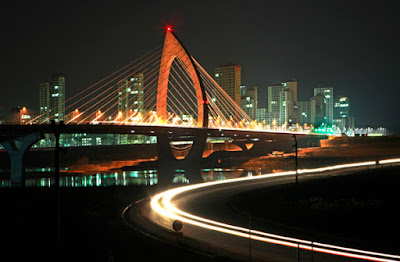 Yesterday, I woke up at 11 a.m. and drank a freshly brewed cup of coffee. I'm still at The Queen Elephant's house, but we now have a coffee maker. Then I read the paper while enjoying a bathroom break. The UFC is coming to Shanghai. The featured bout on the card is Anderson Silva versus Kelvin Gastelum. I'm a huge fan of mixed martial arts. All that blood turns me on. However, I will be forced to view the event from the comfort of my living room. The cost for tickets is outrageous. I simply can't swing it.

I watched several episodes of Vikings with Rice-Boy Larry. He's now a huge fan of the show. We are currently on the episode where Ragnar is fighting for control of Mercia.

The phone rang. It was Miz Perfect.

I said, "Where are the clothes?"

My wife came storming into the house five minutes later.

"We must hully. Dey waiting."

"My mudda and aunt. We go Sejong City to rook at apartment."

I got dressed. Then we climbed into The Queen Elephant's Audi and sped away. The trip took about forty minutes. It was very uncomfortable. My mother-in-law must have screwed around with the volume in her navigation system, and the voice was so loud that it literally gave me a headache.

The apartment turned out to be quite impressive. Plus Sejong looks absolutely marvelous--especially at night. The city is still an infant. It's supposed to turn into the new Seoul. I'm a bit skeptical. But, with that said, Seoul is way too close to North Korea, so the government has to do something.

We won't be living in our new digs. The place is strictly for investment purposes. We'll rent it and use the money to pay the monthly nut. After ten years, we'll sell it and hope to Christ that we don't go broke.