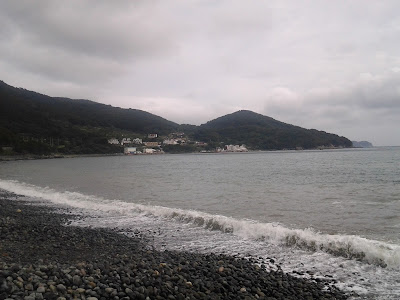 Yesterday, I woke up at 11 a.m. and drank a cup of freshly brewed coffee. Then I read the paper while enjoying a bathroom break. A Korean restaurant in Shanghai is under investigation for selling pork with parasites. Customers noticed the bugs as they ate their meals. The powers-that-be have promised to solve the problem as quickly as possible. Luckily, there are no reports of food poisoning associated with the establishment.

We drove from Masan to Geoje Island in our Hyundai Santa Fe. I've had my SUV for nine years. It's never given me a bit of trouble in all that time. I'm gifting it to my father-in-law when I move to China. Hopefully, I won't have to drive in Asia ever again. These people are crazy.

We found a hotel room across from a beach that was comprised of rocks rather than sand. The owner charged us $100 to spend the night. There was also a seafood restaurant in the same building. We ate grilled scallops and clams. I washed the vittles down with two bottles of soju. The meal was very expensive. South Korea isn't a cheap country.

We walked to a convenience store and purchased beer. Then we descended a concrete stairwell which led to the pebbled beach. The rocks were of all different shapes and sizes. I nearly broke my legs getting to the ocean.

I said, "One hundred dollars a night for this crap? Only in Korea! I can't even walk on this mother-fruiting beach."

I said, "What's wrong with my language? It's a fruiting rip-off."

But Rice-Boy Larry didn't mind the stones. He navigated them like an expert mountain climber. Soon, he was hip-deep in the sea.

I sat down next to the shoreline. It must have been high tide because the strong waves kept knocking my head under the water. I was battered and bruised by Mother Nature for nearly two hours. Finally, the sun went down.

We ate noodles for dinner at a convenience store. I also bought three Roman Candles. You're supposed to hold the tube fuse-side up with this type of firework. However, I did it the opposite way and scared the crap out of several innocent bystanders. One young girl even cried.

I quickly corrected my mistake, but it was too late. My wife's face was twisted with anger.

"Oh, shut up, you fruiting scold."

I returned to the hotel and went to bed. I dreamt that a female sergeant in the United States Army kicked me in the leg. I woke up with a terrible cramp in my calf. I massaged my aching muscles for several minutes. Then I prayed to God and drifted off back to sleep.
Posted by Jack Smith at 2:48 PM