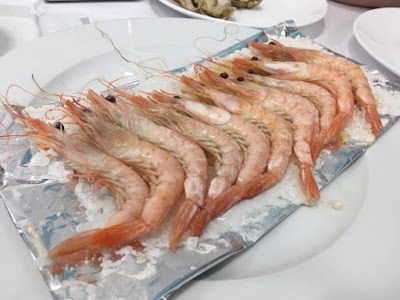 (Shrimp are delicious in spite of the cruelty.)

Yesterday, I took my family to a seafood restaurant. We enjoyed live shrimp cooked on a bed of rock salt. The poor little suckers squirmed to and fro in the frying pan before turning pink and finally dying. The meal was delicious. I'm a big fan of shellfish. They bring me joy. I washed the vittles down with several large glasses of water. Sometimes, H2O is the only liquid which truly quenches my thirst. A good time was had by all.

We walked back to The Queen Elephant's house. I watched several episodes of Vikings with Rice-Boy Larry. Vikings is one of my favorite shows of all time. I'm currently at the part where Ragnar is put to death by King Aella. He's dumped into a pit filled with venomous vipers. It's not a pleasant way to go.

I wanted to call Ken the Atheist using FaceTime. But The Queen Elephant doesn't have WiFi in her apartment. It's like living in the Stone Age. I said my prayers and went to bed at two a.m. I dreamt about my dead uncle. He had a perm and a curly beard. The poor man looked ridiculous. I almost cried.

I woke up at 11 a.m. and drank a cup of freshly brewed coffee. Then I turned on CNN International. Don Lemon shared some terrible news with the entire globe. Donald Trump and Steve Bannon have parted ways. I'm no longer a supporter of Trump. In fact, I don't support anybody. Bannon was the guy pushing Donald's populist agenda. Without Steve, my president is just another Marco Rubio with better jokes. Meet the new boss, same as the old boss.

I got into a fight with Miz Perfect. Her Grave's Disease makes her hormonal from time to time.

I said, "Who were you talking to on the telephone?"

She said, "It not you bidness."

She said, "It was my sista. She take us to dinna."

I was pleasantly surprised. "Where are we going?"

She said, "How da fluit should I know? Am I my sista? You da stoopid man."

I walked into the other room. I can't be bothered with squabbles. I'm just too fruiting old for the headaches often associated with marriage. I cherish peace.

I walked with Larry to the internet cafe. We stopped at the 7-11 to buy drinks. We purchased two cans of Pepsi. Larry is currently playing some video game while I write this stupid blog. We'll probably return home at 6 p.m. to get our free meal. I'll be in China in a couple of days--God willing.
Posted by Jack Smith at 3:07 PM