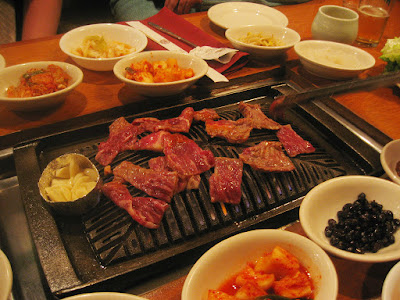 (I enjoyed soju with my barbecue.)

Yesterday, my sister-in-law took us out for dinner. It was our farewell meal. We had Korean barbecue. It included all the fixings such as sauteed onions, Chinese mushrooms, and kimchi. I stuffed my fat face with pork until I thought I would explode. The meat tasted fantastic. I washed the vittles down with two bottles of soju and a big glass of beer. A good time was had by all.

We returned home at 9 p.m. I took a shower and washed the grime from my filthy body. The Queen Elephant doesn't believe in air-conditioning. Plus electricity is simply too expensive here on the peninsula. During the summer, I usually just sit in front of a fan and sweat like a pig.

I watched the rest of Vikings with Rice-Boy Larry.

He said, "Those pagans are much better fighters than the English. I like their style."

"The English end up kicking their butts back to Scandinavia. Historically speaking."

And this is true. King Alfred opened up a can of whoop-ass on Ivar the Boneless back in the 9th century. With that said, I'd never make it as a Viking or a Saxon. I've got the drinking part down, but I fight like a girl. Oh well. What's a boy to do?

He smiled at me nervously. "Mr. Buffalo, you can't be here until April."

I said, "Don't worry. I'm only testing the place out."

I woke up at 11 a.m. and drank a cup of freshly brewed coffee. Then I read the paper while enjoying a bathroom break. Antifa and other leftists shut down a free-speech rally in Boston. They're very proud of themselves, and the media is on their side. The First Amendment seems to be under fire in my nation.

I ate bacon and pancakes for dinner. Rice-Boy Larry had fish, rice, and ass-soup. That boy is a real Asian. I took him for a haircut before walking to the internet cafe. We leave for China tomorrow. I probably won't be able to blog for the next few days. I have to get the internet set up in my apartment.