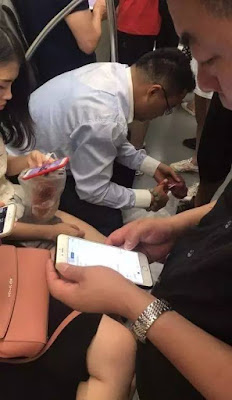 (A Chinese man carved a pig's heart on the subway.)

Yesterday, I woke up at 11 a.m. and drank a glass of Coca-Cola. I'm still at The Queen Elephant's house, so I have no access to freshly brewed coffee. Then I read the paper while enjoying a bathroom break. A man in Shanghai entered the subway with a pig's heart in his hand. He sliced the organ into little pieces during the ride. However, judging by the picture, his fellow Chinese citizens didn't seem too concerned by his peculiar behavior. I wonder if this type of scene is commonplace in the PRC.

My father-in-law took me and Rice-Boy Larry to a local restaurant for lunch. We had barbecue pork. I didn't want to go. The eatery is owned by a Roman Catholic family, and there's a big crucifix located on the counter. The Roman faith makes me queasy. I find it heretical. For instance, every Sunday millions of priest across the globe sacrifice Jesus Christ once again upon their unholy altars. However, as it says in Hebrews, altars, the priestly class, and further sacrifices are no longer necessary. Jesus's atoning death did the trick, so the rest is all Hollywood. But what do I know?

Miz Perfect is still out of town. Therefore, I went to a local internet cafe with Rice-Boy Larry. He enjoys playing Overwatch just like his older brother, Ken the Atheist.

He said, "Wow, talk about beautiful."

Truer words have never been spoken. This particular establishment is very clean, and you get to use these wonderful large-screen computers for less than a dollar an hour. Plus you can order gourmet coffee and have it brought directly to your chair by an attractive waitress. How's that for class?

I wrote my stupid blog. Then I watched several episodes of Vikings. I'm currently on season 2. Rollo is trying to convince Yarl Borg to go raiding with Ragnar during the summer. Ragnar wants to trick Yarl Borg with false promises of friendship in order to give his enemy a bloody eagle.

American television is wonderful. It's actually too good. I read a hell of a lot less than I used to because of all the quality drama currently on the boob-tube.

Larry and I went to a local chicken restaurant for dinner. We both enjoyed fried bird at a reasonable price. I fell off the wagon. I washed the poultry down with two bottles of soju and a huge mug of beer. I'm not proud. Sometimes, I'm no better than the average pagan. But what's a boy to do?