The Nazi salute is illegal in Germany 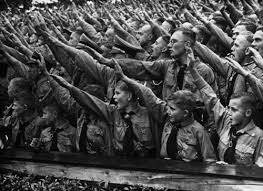 (Two Chinese men were arrested for giving the Nazi salute in Berlin.)

Yesterday, I woke up at 10 a.m. and drank a cup of freshly brewed coffee. Then I read the paper while enjoying a bathroom break. Two Chinese men traveled to Berlin for a vacation. They gave the Nazi salute in public just for fun. They were promptly arrested by the powers-that-be and carted off to jail. The men were released after paying 500 Euros each to the German authorities. Free speech doesn't exist in Europe. But it doesn't exist in China, either. So why quibble?

We left our hotel and drove to McDonald's. I had a Big Mac and two large orders of French fries. I also consumed two apple pies. The meal was delicious. I'm a huge fan of junk food. All that starch sends me straight to the moon. I washed the vittles down with a huge glass of genuine Coca-Cola. I'm a broke dead dick, so I usually drink the generic stuff. But sometimes a man has to splurge.

I said, "Why the heck should we drive to Mokpo? That's a million miles from our humble abode."

She said, "It famous for da octopus."

I said, "I'm a big fat man from America. What the fruit am I gonna to with an octopus?"

"I don't love octopus. I only eat it when I'm fall-down drunk."

I walked up the stairs to urinate. Then I bought another apple pie for the road.

When I move to China, I shall live an Old Testament lifestyle. I'll go to work daily while my wife remains at the tent and cooks the meat. And that's cool with me. I'm sick and tired of visiting places. Sight-seeing wears me out.

We got home at 7 p.m. and walked to the beach. We stopped at a second-story restaurant for dinner. I had sweet and sour pork, and spicy rice cake. The meal was fantastic. I washed the vittles down with two bottles of soju.

Rice-Boy Larry asked my opinion about the rights of the LGBT community.

I said, "You're nine-years-old. Where do you get this crap?"

I said, "I don't give a flying fruit one way or the other. It's their life. They're free to do as they please."

I shrugged my shoulders. "Well, good for him."

We got back to the apartment at 10 p.m. I took a shower and prayed to God. Then I went to bed. I slept like the dead.
Posted by Jack Smith at 11:28 AM