The People Versus O.J. Simpson 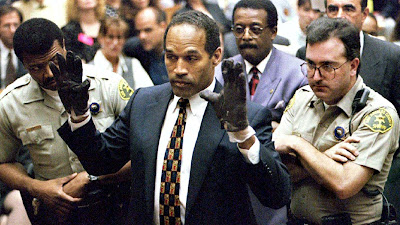 (O.J. Simpson got away with murder.)

Yesterday, I woke up at 11 a.m. and drank a cup of freshly brewed coffee. Then I read the paper while enjoying a bathroom break. A 17-year-old kid from Shanghai died in a river. He was learning to swim but suddenly dropped under the water. His parents were watching him from a nearby boat. They diligently searched for his body but to no avail. They finally had to call the powers-that-be who managed to find the boy's corpse.

I nearly drowned in a lake when I was 14-years-old. None of my friends could save me. I was in such a panic that I kept dragging them down into the deepness. I was eventually saved by an Eagle Scout. If it weren't for him, I wouldn't be writing this piece of crap blog. God bless the Boy Scouts. I owe the organization my life.

I had bacon and rice cake for breakfast. The meal was delicious. I washed the vittles down with several glasses of bottled water. Water is the only liquid on the planet which truly quenches my thirst. Therefore, I drink more H2O than the average shrub.

I said, "How are things in America?"

I said, "Do you have anything new to tell me."

I speak with my eldest son every day. We usually never have a damn thing to say to each other. But that's all right. It's just great to hear his voice. He plans on becoming a registered nurse when he gets older.

I watched a show called American Crime Story. It's focus is the trial of O.J. Simpson. Back in the day, Mr. Simpson was accused of slaughtering his estranged wife Nicole Simpson and a waiter named Ron Goldman.

I like the program because it allows me to marvel at how stupid well-educated people can be. For instance, the lead attorney Marcia Clark and the district attorney Mr. Garcetti actually thought they could get a guilty verdict if they moved the trial to downtown Los Angeles. They sealed their fate the moment they made that moronic decision. Oh well. It's water under the bridge.

I viewed several episodes of Vikings. Ragnar is angry because his wife had a miscarriage. In order to improve his luck, he tries to convince Athelstan to sacrifice himself to Odin. The priest wisely refuses and another poor sucker is sacrificed in his place.

I prayed to God. Then I slept on the living room floor next to the air conditioner. I felt like I was in heaven.
Posted by Jack Smith at 5:18 PM